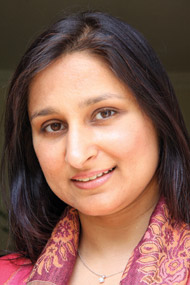 The work of London-based Reeta Sarkar captures the condition and vulnerability of her subjects, combining an eye for detail with empathy for her subjects. As an artist, she is motivated by her extensive involvement in campaigns against poverty and discrimination: her new collection of 17 paintings focuses on the plight of widows in developing countries, which she describes as a “Hidden Calamity”.

It is the tragedy and desolation of widowhood that shines through in Reeta’s canvases - white-clad figures in Vrindavan and Varanasi, huddling children in Rwanda, a group of genocide widows in Darfur, colourful yet faceless, symbolising the invisibility that so often is the widows’ fate. For more than a decade Reeta has served as a trustee of the Loomba Foundation, a charity set up in memory of her grandmother, Shrimati Pushpa Wati Loomba, to highlight the injustices faced by widows all over the world.

The strength of Reeta’s work is that she brings the reality to life in a way that statistics and even photographs often do not. Every widow is an individual; she and her children inhabit a world that is not the same as the one that others live in, even in their own community. This collection manages to combine the big picture with the human scale; bringing us, the viewers wherever we are, closer to the people who so desperately need us to take an interest in their fate.

In so doing, Reeta Sarkar’s Hidden Calamity collection adds a persuasive and haunting voice to the global campaign for widows that has received a significant boost with the United Nations’ first officially-designated annual International Widows Day on 23 June 2011.